I plan to leave this web site up for a few more weeks and then hand the .org name over to Patrick. During that time, some of the content from this site will be merged into the framework of his new site. Please go over to the new site and participate in the forums.

I plan continue blogging about reproducible research from time to time, but future posts will be on my personal blog, The Endeavour. I may write a few more posts here regarding the status of the transition.

Patrick Vandewalle, Jelena Kovačević, and Martin Vetterli have published a new article “Reproducible Research in Signal Processing: What, Why, and How” in IEEE Signal Processing Magazine (37) May 2009.

The Long Now Foundation has produced a Rosetta disk containing 13,000 pages of information regarding 1,500 human languages. The text is engraved, not encoded. The text starts out large enough to read with the naked eye and becomes continuously smaller, strongly suggesting one should examine the disk under magnification to read further. 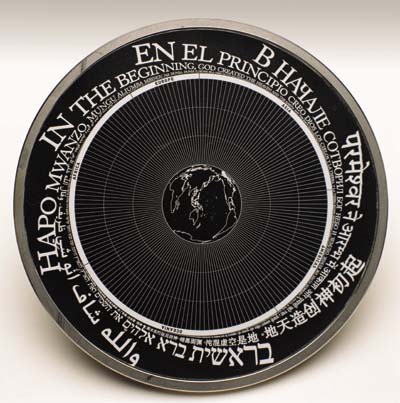 Mundane document preservation is a very difficult problem. Preserving the Declaration of Independence is easy; preserving meeting notes is hard. Preserving the Declaration is a technical problem. If you keep it in a glass case filled with nitrogen, keep the lights low, and make sure Nicolas Cage doesn’t steal it, you’re OK. Millions of people know that the document exists, and they know where to look for it. And besides the original paper copy, the text is available electronically in countless locations.

How do I preserve the document that describes why my internal software application uses the parameters it does? Make notes in the source code? Good idea, but most of the people who want to know about the parameters are not software developers. What about version control systems or content management systems? Great idea: put everything associated with a project in one place. But wherever you put the information, someone has to remember that it exists and know where to look for it.

The Orfeo Toolbox is an open source library of image processing algorithms developed by the  French Space Agency (CNES).

I just found out about  coNCePTuaL, a project that promotes reproducible research in the context of performance measurements for high-speed computer networks.  (The capitalized letters in the name stand for Network Correctness and Performance Testing Language.)

The project is located at  http://conceptual.sourceforge.net/ and is described in the paper Reproducible network benchmarks with coNCePTuaL by Scott Pakin of Los Alamos National Laboratory.

Some of the highlights of coNCePTuaL:

See Greg Wilson’s post this evening Science in the Open for two stories of reproducible research.

Sweave has been discussed here many times, but here’s a brief description for those just joining the discussion. Sweave is a tool for embedding R code inside LaTeX files, analogous to the way web development languages such as PHP or GCI embed scripting code in HTML. When you compile an Sweave file, the R code executes and the results (and optionally the source code) are inserted into the LaTeX output.

Sweave has the potential to make statistical analyses more reproducible. But I doubt many realize its vulnerabilities. The Sweave files are likely to have implicit dependencies on R session state or data located outside the file. You don’t really know that the output is reproducible until it’s compiled by someone else in a fresh environment.

My proposal is a service that lets you submit an Sweave file and get back the resulting LaTeX and PDF output. An extension to this would allow users to also upload data files along with their Sweave file so not all data would have to be in the Sweave file itself. For good measure, there should be some checksums to certify just what input went into producing the output.

Here’s one way I see this being used. Suppose you’re about to put a project on the shelf for a while. For example, you’re about to submit a paper to a journal.You may need to come back and make changes six months later. You think about the difficulty you’ve had in the past with these sorts of edits and want to make sure it doesn’t happen again. So you submit your Sweave document to the build server to verify that it is self-contained.

Here’s another scenario. Suppose you’ve asked someone whom you supervise to produce a report. Instead of letting them give you a PDF, you might insist they give you an Sweave file that you then run through the build service to make your own PDF. That way you can have the whole “but it works on my machine” discussion now rather than having it months later after the person who make the report has a new computer or a new job.